For all those Sachin fans who regard Dravid to be any less a legend than Sachin.....
India is a cricket-crazy nation.Forget being crazy about the sport, people follow it like a religion, with complete devotion,treating cricketers like GODS.
Whenever cricket is discussed in India, the first person that all Indians think of is Sachin Tendulkar. Needless to say, this great man needs no introduction. The little master has played for India over 25 years, scoring 100 centuries. Millions of people follow him ardently, to a level of worship. His fans regard him as the GREATEST CRICKETER in world history and feel that Cricket is humbled to have him. No offense to the stalwart, I strongly feel that no player is greater than the sport.
Due to some chauvinists who compare Sachin with other greats of the game, it sometimes goes par tolerance to think of him as the only legend India ever produced. These followers treat other players as amateurs or perhaps even nonexistent in front of Sachin.
Their main target is one of Sachin's best comrades both on and off field-Rahul Dravid.Often regarded as THE WALL for his rock-solid game, DRAVID has been India's most consistent batsman and the world's most classical and technically correct cricketer.He is the epitome of masterclass and the Lord of Superfine cricket.  In his career of 16 years, Dravid has 13,288 test runs and 10,889 ODI runs with the record of a century in every cricket playing nation. He has many partnerships with Sachin that have added to India's best innings partnerships. Though no 2 players must be compared, there are certain things that Sachin fans need to know before considering Rahul Dravid any less a legend than Sachin.
Sachin has always been among the most active cricketers in news headlines. Limelight has never left his path. His fans regard cricket lucky to have him. If he plays, the sport is humbled, if he scores a century, he is the best, if he takes a catch, there is nobody to match upto him. If he drops a catch, the batsman is at fault, if he is out for a duck, it is just bad luck, if he does not play, India will lose.
But, if Dravid plays, it's fine, he scores a century, he goes unnoticed, he takes a catch, it was an easy one, if he misses a catch, he is a bad feilder, if he gets run out, he is a slow runner & if he does not play, it's just fine. Why so? If you actually sit to compare their performances, Dravid has a better consistency percentage. Then how is he any less a legend than Sachin?
Dravid came, played and went unnoticed all the while. Despite being consistent, dependable, committed and exceptional, he wasn't given the recognition that he deserved. The fact that Indians wanted Sachin to play, they NEEDED Dravid to play to survive.
If Sachin hits some odd runs in front of Dravid's half-century, still he will have all the limelight. All through his career, Sachin opened with personal choice, or came in at 4. But Dravid opened, kept wickets, came in at 4,5 or even 7 at times. He fielded  at the slip and took 210 catches. He adjusted all the while, never saying no to his team. He played for his nation and not records. Still Sachin is the BEST? Really?
Forget the silence through his career, his farewell too was an ordinary one. He made way for a youngster in the team. Sachin, on the other hand chose his opposition teams. His position remained fixed, keeping one youngster out of chance. He even chose to retire against West Indies. He got a big-bang farewell, with full media coverage and loudness. He had a farewell series to his name, a highly commercialized event.
But still! Sachin is great and Dravid is not?
Well, Sachin will remain to be known for his records, but Dravid will always be remembered for his perseverance and personality on the field.
If like to say that if Sachin is Superman, Dravid is the dark knight. As a Dravid fan, I'd like to conclude by saying that,
SACHIN MAY BE THE GOD,
GANGULY may be next to God on Off-side
LAXMAN may be the God of 4 th innings,
But when the doors of a temple are shut, even the Gods remain BEHIND THE WALL.
Posted by Unknown at 08:49 No comments:

For the Indian Soldier

Before I mishandle my unbridled patriotism,
Devastated that is by my countrymen's communalism,
I would like to mutter and curse,
And pledge to never speak even in verse,
About the diffusing provincialism.
As all my brothers who commandeer forces and circumspect the boundary,
Not for their worthy praise or fee,
But to let us breathe free,
Sans the sigh of anguish PHEW!
For the brothers of my motherland,
All I want is to
Adapt your non-spasmodic and gallant virtue,
And predispose myself to your spirit-
To have the will to fight it out and win it!
Like how you
Never let your duty relinquish ,
Among traitors and brothers you distinguish,
Though being affected by our mother being impoverished,
But never speak I'll with anguish.
I am incapable to breach a fortress with my verses,
But I wish your thundering spirit never effaces!!
JAI HIND!
-RICHA GUPTA
Posted by Unknown at 22:45 1 comment:

The very thought of being born in a nation as great as India is so scintillating ! I'm proud of my country,it's seasons,it's religions, it's colors , it's glory, it's affection, it's humanity, it's fraternity, it's integrity et all. Words can't describe how I handle my unbridled patriotism! Everyday I live is for my nation and because of it! Today is just a reason to say it again! JAI HIND! Cheers to my motherland, the epitome of divinity! Happy Republic Day!! 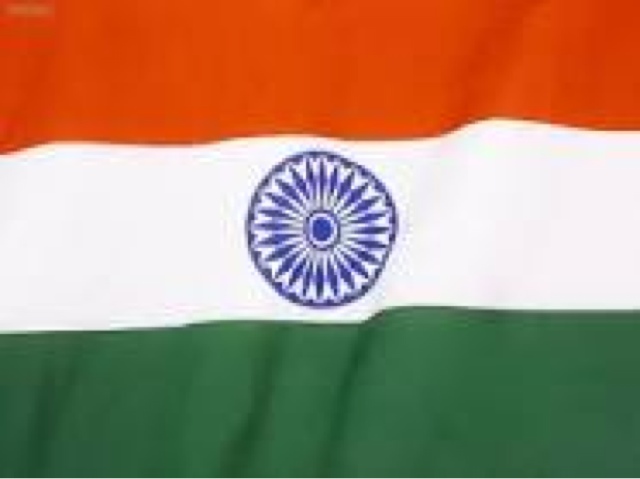